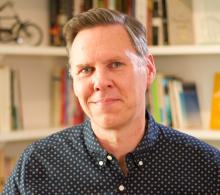 Sheridan Voysey is a writer, speaker and broadcaster on faith and spirituality. He is the author of eight books, including Reflect with Sheridan (Lion Hudson, 2020), The Making of Us: Who We Can Become When life Doesn’t Go as Planned (Thomas Nelson/Harper Collins, 2019), Resurrection Year: Turning Broken Dreams into New Beginnings (shortlisted for the 2014 ECPA Book of the Year Award), Resilient: Your Invitation to a Jesus-Shaped Life, and Unseen Footprints: Encountering the Divine Along the Journey of Life (winner of the 2006 Australian Christian Book of the Year). He writes for Our Daily Bread, a devotional read by 90 million people daily. Sheridan is a regular presenter of Pause for Thought on BBC Radio 2’s Zoe Ball Breakfast Show (heard by 9 million people daily), and has conducted over 2000 radio interviews in his 25-year broadcast career. He speaks at conferences and events around the world, and has been featured on numerous TV and radio programs including BBC Breakfast, BBC News, Channel 5 News, Day of Discovery, 100 Huntley Street, CBC’s Tapestry, plus publications like The Times, Telegraph, and Christianity Today.