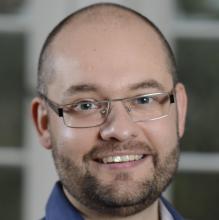 Alexander Fink is Director of the Institute for Faith and Science (Institut für Glaube und Wissenschaft) in Marburg, Germany (www.iguw.de). He studied physics at the universities of Bayreuth and St. Andrews (UK) and received his PhD at the Institute for Biophysics at the University of Regensburg. After having worked as an industrial product manager, he became director of SMD graduates' ministry (Akademiker-SMD, the German branch of IFES) until 2014. His passion is the dialogue of science, faith, and worldviews, and has given apologetic lectures in Germany and other European countries. Since 2008 he has been a member of the ELF Steering Committee and has co-led the Scientists Network. He is editor of the "Begründet-glauben-Podcast" (www.begruendet-glauben.org) and has produced two documentary movies "Fascinating universe" and "More than my brain" which have been recommended by a German federal media centre for use in public schools. Together with his wife, Alexander enjoys raising his two children, leading a house group in his local church in which he regularly leads services and preaches. He also is the coach of a youth soccer team.

View Alexander's past talks on FOCLonline.org